We received a brilliant story today from Kelly, KSFL Cambridge, about her dog’s KSFL transformation! 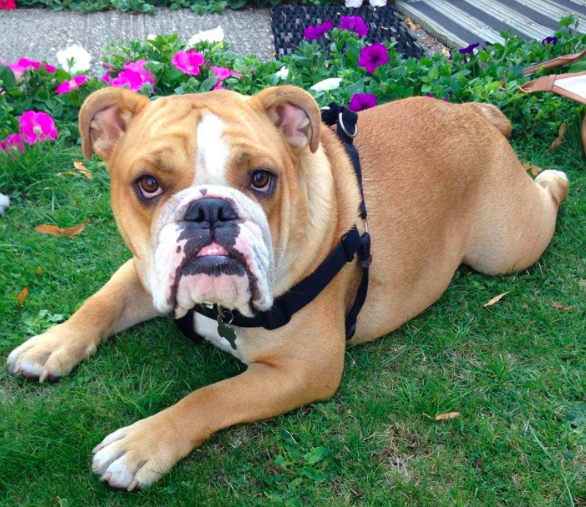 We own a 2 and half year old pedigree British Bulldog called Bentley who we love and adore like any dog owner.

Bulldogs are known for their health issues, they often have stomach upsets, allergies which cause them itchy and flaky skin, breathing problems and can’t regulate their own body temperature so when we brought Bentley into our lives as an 8 week old pup we knew we had our work cut out for us.

Over a year ago Bentley weighed 30kg, He was often throwing up, very upset stomach, and was really depressed. He hated going for walks and would make himself as heavy as possible so we couldn’t take him. We were told by our vet he needed to go on a low fat diet and we needed to change his food to this ‘special’ Low fat kibble that they would supply for us.

Now Jay and I have been franchisees for Kick Start Fat Loss for over 3 years so at the time we were told this we knew it went against everything we knew worked for humans so why would this work for dogs???

Our Vet knows what we do for a living so he didn’t force us to make this change and said go away and think about it, but whatever happens Bentley needs to loose 5kg in weight and we knew he was really unhappy as a pup and that his weight was making his health issues worse.

It seems ironic that 2 personal trainers can have an over weight dog! but people kept telling us that Bulldogs don’t like exercise and because he couldn’t regulate his own body temperature, I didn’t want to push him.

So we decided to go against the vet and with our hearts and put Bentley on a version of KSFL for dogs – quality protein, high fat and no sugar or processed carbs!
We are really lucky that we have the most amazing pet shop called Scampers up the road from us who specialise in animal health from a clean eating perspective. They promote giving your dog coconut oil and even sell it for dogs!
So we transferred Bentley onto a RAW food diet where he has a brand called Nature’s Menu which is just raw meat and vegetables.
We gave him a teaspoon of KSFL coconut oil everyday – which he goes crazy for and I looked into taking him to Hydrotherapy for Dogs.

I found Cambridge Hydrotherapy for dogs and had to get the vet to sign a form to say that Bentley was appropriate for this treatment as he is over weight. We met the trainer Kevin about a year ago and on the first session Bentley was really not impressed as Bulldogs also can’t swim as their heads are too heavy so Kevin used a dog life jacket and was brilliant with Bentley! After the first session we realised this was definitely the way forward for Bentley and booked him in every Saturday for half an hour.

Bentley is now a year older and a totally different dog! He weighs 27kg (his weight will not drop any further as he is now solid muscle) but he has lost around 10 inches from his waist. His skin is much better, he breathes better, he is so active now it’s unreal and people look at us like we are mad because he loves running (not long distance but more intervals like his mummy and daddy). He takes a running jump into the hydro pool now and loves his swimming sessions and hasn’t had an upset stomach or sick for a long time! 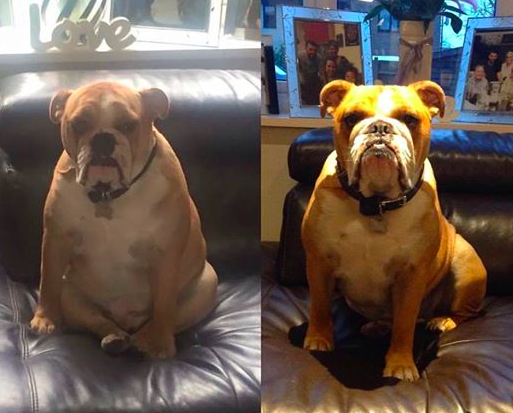 Taking sugar and processed kibble out of Bentley’s diet was the best thing we could of done, he’s slimmer, fitter and and very happy puppy now! The vet is over the moon, even though we didn’t go with his low fat diet! He agree’s that we made the right choice!

Bentley now has clean treats of fish cubes, or pure venison sticks which sound expensive and yes they are but the money we have saved on vet bills every week we can afford to feed him really high quality dog food.

I know it sounds mad to have our dog on Kick Start Fat Loss diet but it’s really worked and if we had not known the nutritional knowledge we do by delivering Kick Start then who knows what he’d look or be like today!

if you want any more information on how you can follow KSFL with your pets or are in the Cambridgeshire area and want to loose inches like Bentley then contact us at www.kickstartfatlosscambridge.com

Thanks Kelly for your story, it is great to see Bentley in tip top shape with his KSFL diet!

Posted on April 5, 2016 by rachellholmes