Fat is not to blame and the sugar pay off

I am sure you have read the recent news about the “Sugar pay off” this is shocking news of corruption revealing the lack of trust we should have in research and the sugar industry.

Here at Kick Start we have been battling for years in the sugar vs fat argument and finally the truth is coming to light… sugar is the problem. Other slimming groups started because scientists were paid off by the sugar industry to make fat the villain and then those scientists also were responsible for drafting the first dietary guidelines all in favour of the sugar industry… fat IS NOT to blame and here is why.

Read the story in the news:

Here is the story:

In the 1960’s the sugar industry paid scientists, ALOT of money, to play down the link between sugar and heart disease and instead make saturated fat look like the culprit.

“The internal sugar industry documents, recently discovered by a researcher at the University of California, San Francisco, and published on Monday in JAMA Internal Medicine, suggest that five decades of research into the role of nutrition and heart disease, including many of today’s dietary recommendations, may have been largely shaped by the sugar industry.” Said the Business Standard
“They were able to derail the discussion about sugar for decades,” said Stanton Glantz, a professor of medicine at UCSF and an author of the JAMA paper.

The Sugar association paid 3 Harvard scientists to publish a review of research on these areas and heart disease, these reviews were then hand picked by the sugar group which were then published.

‘It was so blatant. And the “bribe” was so big.’ quote taken from the Daily Mail

‘I thought I had seen everything but this one floored me,’ said Marion Nestle of New York University, who wrote an editorial on the new findings.

Reports have shown that the influence has been continued through recent nutritional science too.

“The Harvard scientists and the sugar executives with whom they collaborated are no longer alive. One of the scientists who was paid by the sugar industry was D Mark Hegsted, who went on to become the head of nutrition at the United States Department of Agriculture, where in 1977 he helped draft the forerunner to the federal government’s dietary guidelines. Another was Dr Fredrick J Stare, the chairman of Harvard’s nutrition department.

In a statement responding to the JAMA report, the Sugar Association said that the 1967 review was published at a time when medical journals did not typically require researchers to disclose funding sources. The New England Journal of Medicine did not begin to require financial disclosures until 1984.”

The industry “should have exercised greater transparency in all of its research activities,” the Sugar Association statement said. Even so, it defended industry-funded research as playing an important and informative role in scientific debate. It said that several decades of research had concluded that sugar “does not have a unique role in heart disease.”” Said Business Standard.

So remember the “low-fat” era we have lived through… it is all wrong! Some may say this has in fact FUELLED the obesity crisis by replacing fat with sugars and promoting this as healthy.

“It was a very smart thing the sugar industry did, because review papers, especially if you get them published in a very prominent journal, tend to shape the overall scientific discussion,” Business Standard.

This is the battle in the health and nutrition industry… getting the RIGHT information out there and battling against old information that is not necessarily true.

Here at KSFL we are all about getting the right information to you, making you an informed consumer, armed with information and guidance in which to transform your health.

Rachel Holmes, the creator, is currently touring the UK talking to the local communities about sugar and nutrition. Join us at a free launch near you: 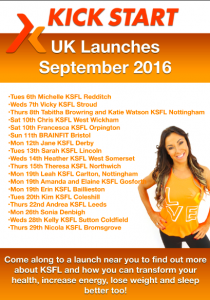 Hear what Rachel Holmes has to say about the diet industry and how KSFL came about:

Posted on September 14, 2016 by rachellholmes