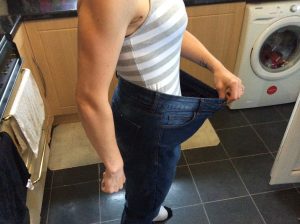 Michelle Morton (43) has lost a staggering 4 1/2 stone and gone down from a size 16 to a size 6 since joining a Kick Start Fat Loss Club.
The KSFL Franchise is run by Sindy Matthews in Banbury

“ I had another baby 2 years ago (making a total of 8 children) and then broke my neck in December 2012. It took doctors 7 months to diagnose and my life pretty much ended there and then.
After it was operated on in 2013 my healing process was great but I had gained alo t of weight and felt stuck,” says Michelle.

Michelle’s diet became really bad after the horrendous ordeal as she used food as a comfort blanket.

She consumed a constant stream of takeaways, processed food, kids’ leftovers and, being the world’s fussiest eater who did not like fruit, veg or fish, her nutrition was pretty awful.

“The last straw was looking in the mirror every day and not liking what I saw – well hating what I saw to be honest,” says Michelle.

Michelle had attended Sindy’s fitness classes in the past and knew Sindy would have her best interests at heart and be able to coach her with the most up to date nutritional information and care.

In 5 months Michelle has regained her figure, her confidence and her life. It’s an amazing transformation for this super busy mum of 8.

“Now in a typical day I eat (for example) – smoked salmon, poached egg, spinach, tomatoes and mushrooms for breakfast, smoked mackerel pate and salad for lunch,
KSFL pizza with desired topping and butternut squash chips, peas and green beans for tea – a lot of my inspiration is from the KSFL recipe book and most of those
I have made, tried and adapted.”

Michelle’s future goals are to remain as she is but continue to get fitter.

“I could not, no matter what, go back to the old way of eating and living,
it is now a very big part of my life and one that I could not give up.”

Michelle is also looking at becoming a Kick Start Fat Loss coach and help others change their lives.

“KSFL has changed not only my life but my family’s life so much and for the very better,

difficult it can be to make the change but I can honestly say it is so worth it and with the right coaching and leader you can achieve anything.”

all over the UK.

The newcomer on the slimming club block KSFL now has 50 franchisees all over the UK & is
working with the NHS in Suffolk on new pilot programmes for combating obesity.

Posted on September 5, 2014 by rachellholmes