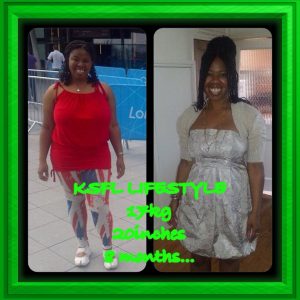 Denise Adolphe (41) looked in the mirror and didn’t even recognise the person staring back at her.

Although she enjoyed her veggies she would pile the food on her plate at every meal.

Her weight skyrocketed and, coupled with that, she had a medical condition that saw her GP prescribe her Prednisolone.

Prednisolone is a commonly prescribed steroid that is used for a multitude of inflammatory and respiratory conditions.

In the UK only, over 6million prescriptions are given out annually for this drug, with one of the side effects being increased appetite and weight gain.
Denise suffered with an insatiable appetite as a side effect and her weight continued to soar.

“I just got fed up of looking in the mirror at someone that I didn’t know. Also 90% of my clothes didn’t fit me anymore. I felt horrible when I was going out.
I was the fat one and I hated it,” says Denise, who is a Project Manager for a London Council.

Before attending KSFL Denise would literally be eating all day.

The day would start with porridge with added banana and honey, then fruit, and then biscuits.

Lunch would be a large pasta with cheese and a small amount of veg. Dinner would perhaps be rice with fish and veg and a chocolate bar to follow.

“On a typical day now I eat three meals, breakfast is usually eggs and salad, lunch is fish and some steamed veggies, and dinner would be fish with sweet potato or butternut squash, roasted veggies and steamed

veggies or maybe a lentil curry with steamed veggies,” says the East London based mum of two.

Part of the Kick Start programme is to incorporate a HIIT (High Intensity Interval Training) Workout which Denise really enjoys.

“I have always been into exercise, loved the fitness weekenders etc, but realise that some of the exercise I was doing was a waste of time and I’m loving the HITT.”

Denise has lost 17kg and 22 inches and she is still losing PLUS her boobs have gone down from a 32K to a 32 HH which she is over the moon about!

“When I was 5 months pregnant in May 2010 I was diagnosed with a rare autoimmune illness called myasthenia gravis.

It affects your voluntary muscles, so opening your eyes, holding your head up, chewing, swallowing, breathing, using your hands, fingers, arms etc.

You also get very very tired. I was put on prednisolone and I put on around 20 kilos in 6 months.”

“When you are already ill and you are overweight you are just putting even more pressure on yourself. I found it very difficult, for example. taking the kids to the park and keeping up with them. And because I felt worse in myself I think the MG was worse. Now I feel so much better. And although I had a crisis in June and was in hospital for 10 days, I a.m sure that had I not done KSFL it would have taken me longer to recover”

“Don’t even think about it, just come along and Tasha will care for you and look after you and give you the most up to date help and advice, I love it.”

Posted on December 11, 2014 by rachellholmes